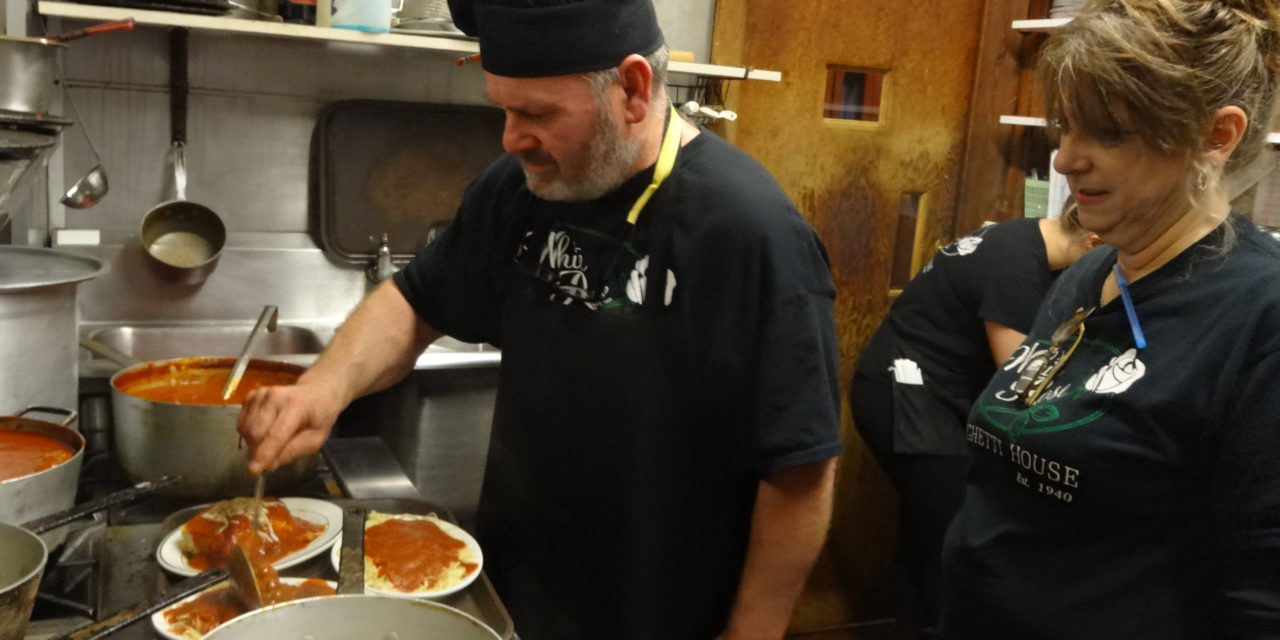 The White Rose Spaghetti House was a central part of Jessica Basinger’s life when she was growing up.

“Even if we didn’t come in, I told my dad we needed to get takeout,” the Brookfield High School graduate said. “If I wasn’t here on a Thursday for ravioli night, I was completely devastated.”

After she moved away, she always visited the White Rose, on Standard Avenue in Masury, when she came home for a visit.

“If it was a Sunday or Monday and they were closed, I would be completely crushed, because I wasn’t going to get it (White Rose sauce) before I went back,” she said.

For Basinger, the White Rose’s appeal is the sauce. 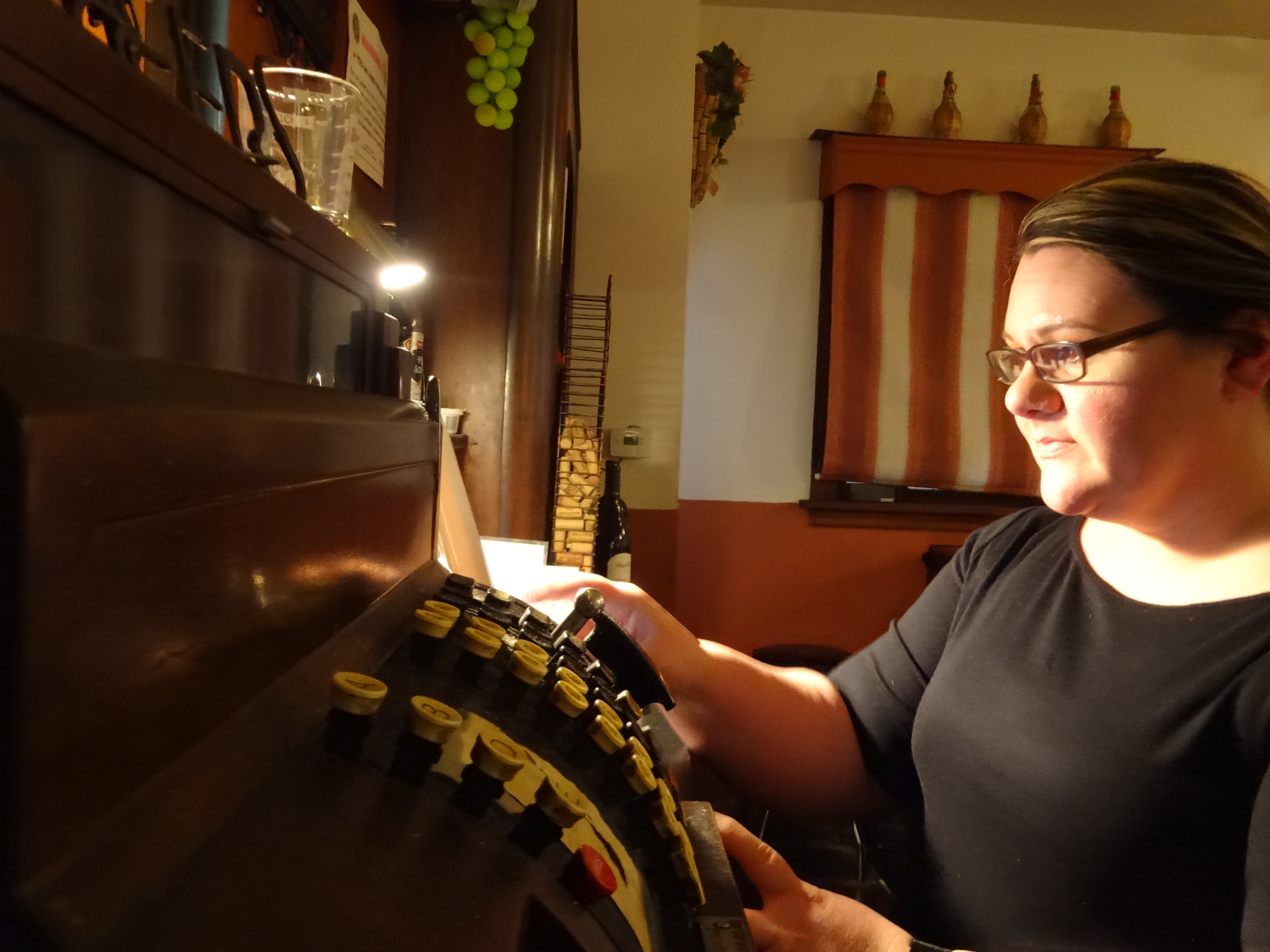 “It is all the sauce,” she said.” I would have to contain myself from tipping my plate over and drinking the end of it because I was out of bread.”

The recipes for the White Rose sauce, the house salad dressing and the lasagna, secrets held for so long by the Quartini family, are now in Basinger’s hands. Sort of.

“My father (Mike Chaney) is the only one who knows those recipes,” Basinger said. “Even Adam and I do not know those recipes. When he (Chaney) makes the sauce, the kitchen goes on lock down, everybody gets kicked out.”

Adam is Adam Basinger, Jessica’s husband, also a Brookfield High graduate, a Marine Corps veteran and current reservist – and the new owner of the White Rose. Jessica is the face of the restaurant as she is staying with her mom in Masury and runs the eatery while Adam lives in Maryland for part of the week, where he is a military intelligence analyst. Her father is the cook. 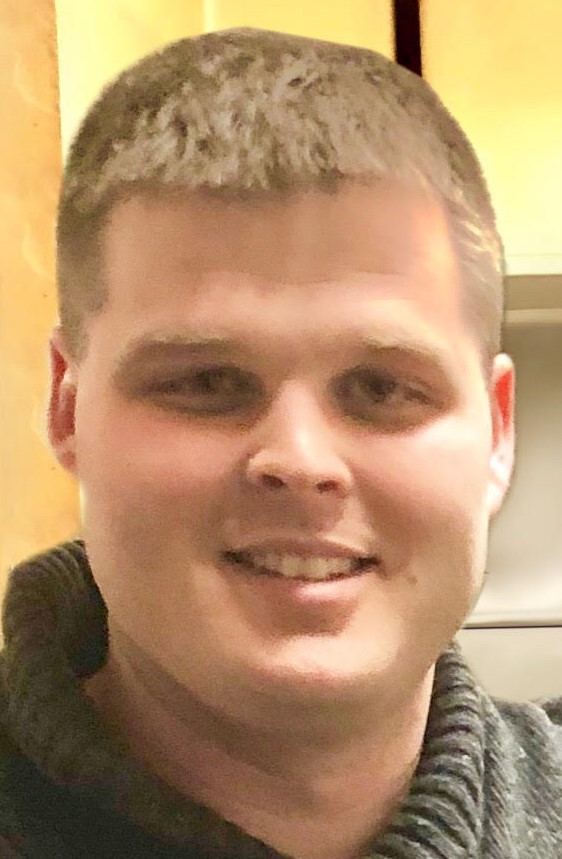 The Quartini family founded the business in 1940 as the Last Stop to cater to mill workers.

It was a sad day when Howard Quartini put the restaurant up for sale, said Betty Grigsby, who has worked at the White Rose for 22 years.

“He was a wonderful boss, a great man,” she said. “His family, I counted them as my family.”

Quartini did not want to comment for this story, Jessica Basinger said.

Grigsby has stayed on with the Basingers because she sees them maintaining the same atmosphere that Quartini fostered. Jessica Basinger is one of those kids she watched grow up in the restaurant.

Chaney is a long-time friend of the Quartini family and gave them a print of a Van Gogh painting of white roses that brightens the women’s bathroom about 30 years ago. He is central to his daughter’s and son-in-law’s motivation in buying the place.

Chaney has been working construction since he was 14.

“People like that don’t have a retirement plan,” said Jessica Basinger, who has a psychology degree and no previous restaurant or business management experience.

The Basingers thought a restaurant would give her father something to do that wouldn’t take such a toll on his body, she said.

“He has a passion for cooking, he always has,” Basinger said. “He’s the type that can go into a kitchen with no recipe, no nothing and just walk out with the best thing you’ve ever eaten.” 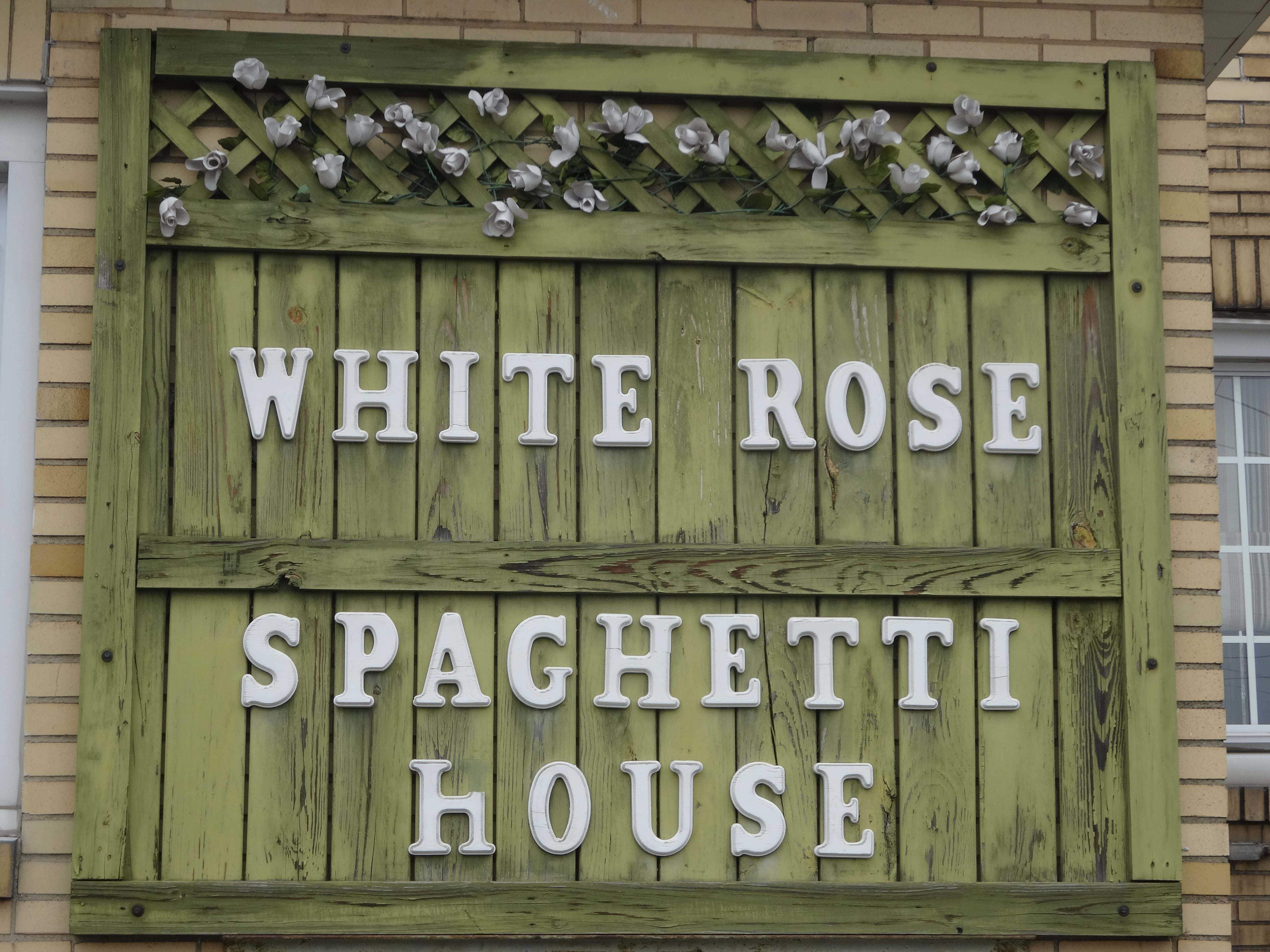 However, cooking for the White Rose means adhering to recipes that have been used for decades, and Chaney feels the pressure to make everything just right, she said.

Because the Basingers wanted to maintain customer expectations, they kept it quiet when they took over in January.

“We tried not to promote too much, because we wanted people to find out a month or two later that it was sold,” she said. “Our goal was for nobody to notice that it was sold.”

However, the Basingers have made small changes. They allow patrons to pay with credit cards, as opposed to Howard Quartini’s cash-only policy. They installed wifi and computerized the bookkeeping process, ending Quartini’s practice of hand-written paychecks and ledger entries. They started a Facebook page and actually market the place, something Quartini didn’t do.

The Basingers kept the same menu, pricing, décor and employees.

“We (wanted) to keep Betty because Betty is part of the legacy,” Basinger said. “When people think of the White Rose, they think of her. She was my waitress growing up. Keeping her was an essential part, because that gave people the comfort of knowing, ‘Oh, they’re not changing too much.’” 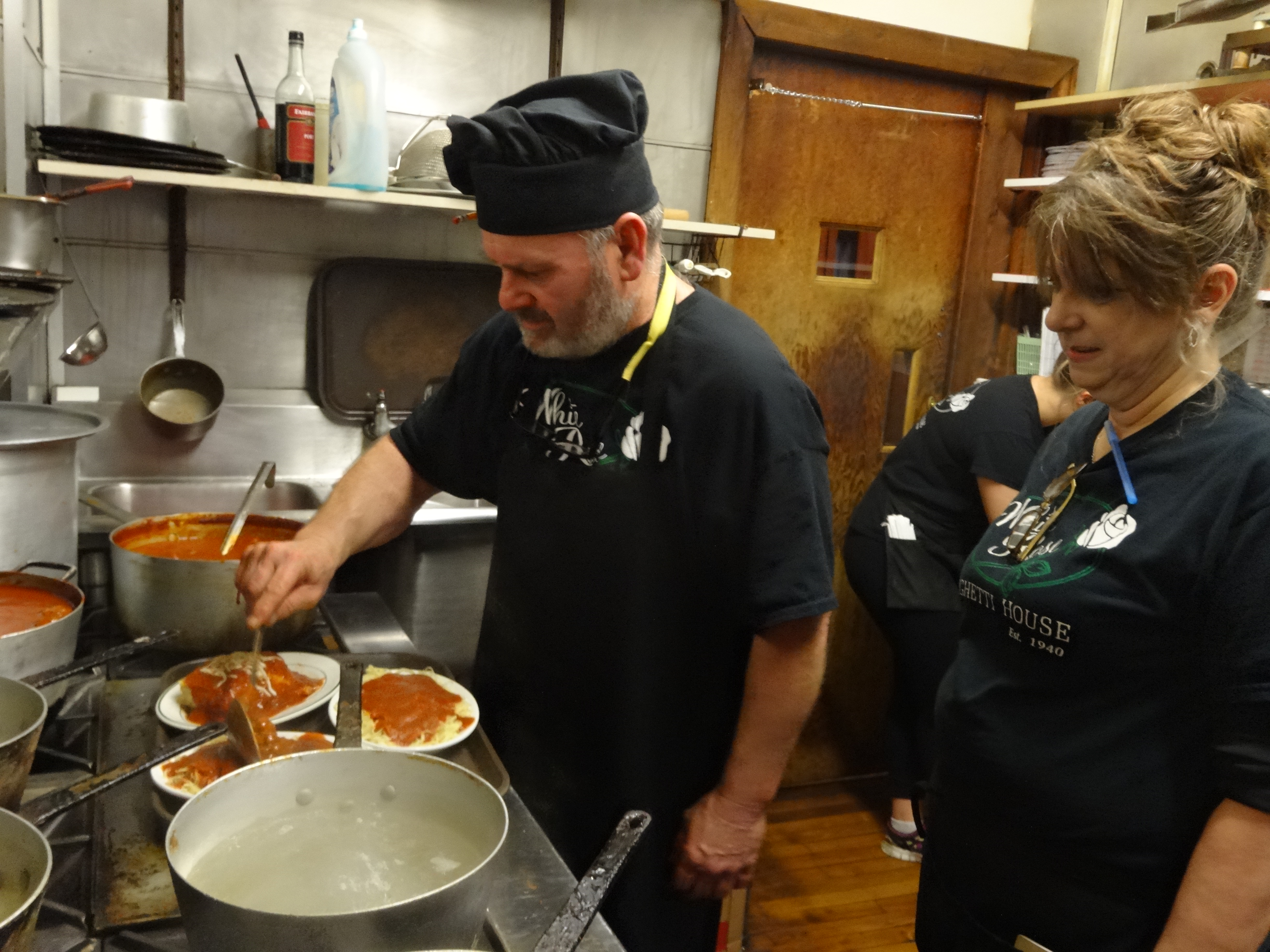 “I’ve talked to many of the customers and they’re happy that it’s someone who came as children and wanted to keep things the same,” Grigsby said.

Quartini stayed on a couple of weeks to train Chaney, then slipped out quietly without saying goodbye to the employees or his regular patrons.

“He said he just wanted to fade away quietly and not make a big deal out of this,” Basinger said, adding that he stops in to say, ‘Hi,’ once in a while. “The girls had gone and got him a cake, and he wasn’t here for that. He got very choked up when he was here and walked out the door.”

The Basingers have plans for the place: adding lunch takeout, delivery, expanding hours, building a patio and hiring employees to support the new services. They want to carry on the Quartini legacy, but create one of their own.

When the Basingers bring their 9-month-old son, Reese, into the restaurant, Adam tells him, “This is going to be yours in a few years,” Jessica said. “He can’t even hold his bottle, yet, but he’ll be holding a spoon, stirring the sauce.” 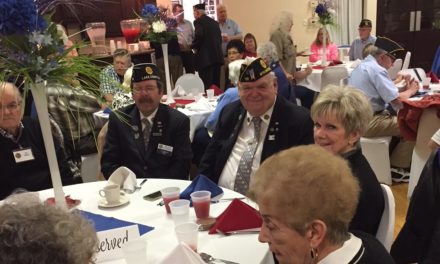