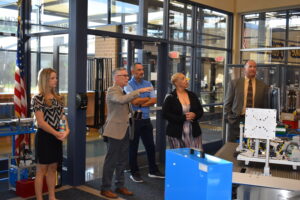 Brookfield Local School District might be a small school district, “but we are very mighty,” Dr. Marquita L. Hubbard Kemp said Sept. 10 in her acceptance speech for the Brookfield Distinguished Alumni Hall of Fame.

Brookfield has always managed to have mighty leaders, such as in her day, Supt. Paul Wright and teachers and principals Milrod Lunich and Lou Saloom, she said. It has espoused the mighty tenets of innovation, family and leadership, all of which are aspects of “the Field,” the motto for Brookfield’s Positive Behavior Intervention and Supports program.

As part of her honor, Kemp, a registered nurse with two master’s degrees who works in an administrative capacity for the Department of Veterans Affairs in Cleveland, spent a day at the school, touring it with Supt. Toby Gibson – who also was inducted – and spending time with students.

“Brookfield is an amazing place,” said the 1980 Brookfield High School graduate. “I wear my badge of honor. I live in Brookfield, I’ve traveled the world and I’m back in the community.”

The other inductees also expressed the impact Brookfield schools has had on them.

“What Brookfield lacks in size and diversity in some ways it makes up for in values, relationships and caring,” said Kaitlyn Nasci Lang, school psychologist at Edgewood City Schools in Trenton, Ohio, and a 2002 Brookfield grad. At Brookfield, “Without knowing it, I learned about networking, building relationships, establishing rapport with others, volunteerism and self-reflection.” 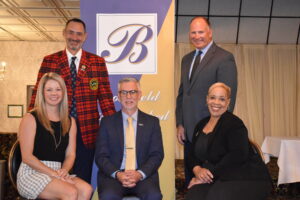 The hall of fame was created in 2019 by former Supt. Velina Jo Taylor.

“The goal of this committee is to recognize Brookfield graduates who have reached a pinnacle of success in their chosen professions and have used that success to help others,” said committee member Bob Kozar.

Although Gibson has spent 23 years in the district as a teacher, principal and superintendent, he had never had a day like the one Sept. 9, when he interacted with students in a way that didn’t necessarily include grades, classes or school activities, and got to know the other inductees.

“To spend it talking to students, having students ask us questions about our life and our path and listening to the stories of the other four individuals was absolutely amazing,” said Gibson, a 1991 BHS grad.

While he is trying to produce students who are ready to go on to be successful and innovative and contribute to their communities, he is a product of people who set expectations for him, he said.

“I am here because of friends, family, community members and teachers; people in this room who inspired me to do what I do,” Gibson said. 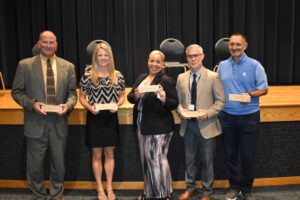 Brookfield 1985 alum Dr. Joseph Zuhosky singled out his high school baseball coach, Russ Hake, with having a confidence in Zuhosky that Zuhosky didn’t have in himself, and teacher Francis “Marty” McCabe’s lobbying that he attend Notre Dame with helping him “believe a dream into existence that I didn’t even know I had.”

“I am, and always will be, proud to be a Warrior,” said Zuhosky, who practices physical medicine and rehabilitation in Charlotte, N.C.

Jason Straka said there is a “commonality” to the five inductees that “isn’t necessarily a professional accomplishment,” he said.

“It’s how we like to give back to the community which we are part of professionally and personally,” said Straka, a golf course designer and partner with Fry/Straka Global Golf Course Design, Dublin, Ohio.

For Straka, that includes participating in industry organizations, teaching and mentoring at the college level, and volunteering for college scholarship programs and at his church. In addition to professionally striving to spare people from having surgery, Zuhosky has coached a number of youth sports teams, served on school building committees, and is working to help create college maternity centers for pregnant students. Lang and her husband, Jeff, coordinate an annual golf outing to raise money for veterans’ groups in memory of Jeff Lang’s brother, Andrew, an army vet.

Lang, who was inducted into the Brookfield Warrior Hall of Fame last year for her athletic pursuits, said her professional accomplishments pale in comparison to the other inductees, but she said she represents something that is important in its own way.

“Here I am, a school psychologist just doing her job,” Lang said. “I like to think, on this stage, I represent that the small things you do make a difference. You don’t need to save the world, cure cancer or be a rocket scientist in order to be considered successful.”

Gibson said his wife, Christy, taught him to appreciate the little things.

“All I’ve been doing for the past 23, 24 years is trying to show off to my wife, and to impress my kids,” he said of son Haden and daughter Katie. “That’s all this has been.”

The Distinguished Alumni Hall of Fame is accepting applications for future honorees. Contact committee Chair Diane Riefstahl at 724-456-2081 for information. 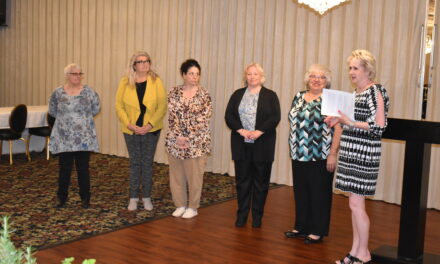