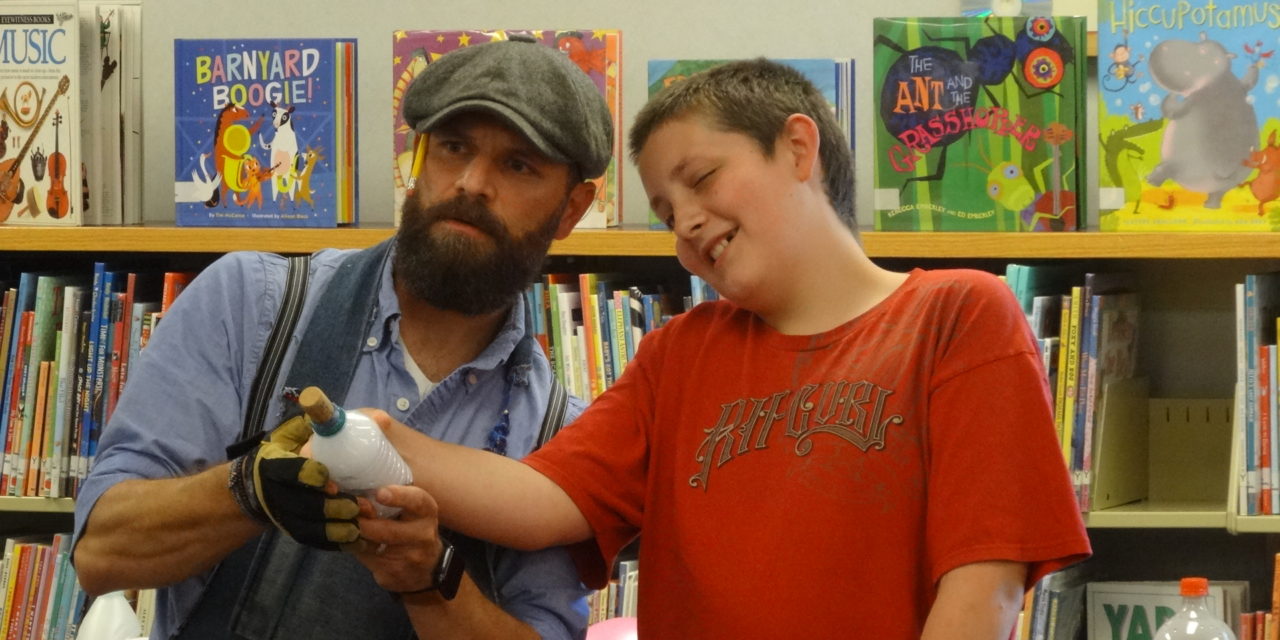 When you think of what might be in a chemistry laboratory, do you think of Cheetohs, dish liquid and Styrofoam?

Those were three of the items that edutainers from OH WOW! The Roger and Gloria Jones Children’s Center for Science in Youngstown brought with them June 13 for a program on “Cool Chemistry” at the Brookfield Branch of the Warren-Trumbull County Public Library.

It all goes to show that kids can be made aware of science through fun, said Senior Edutainer Ralph Urbach.

“We like to play all day but teach you things,” he said. 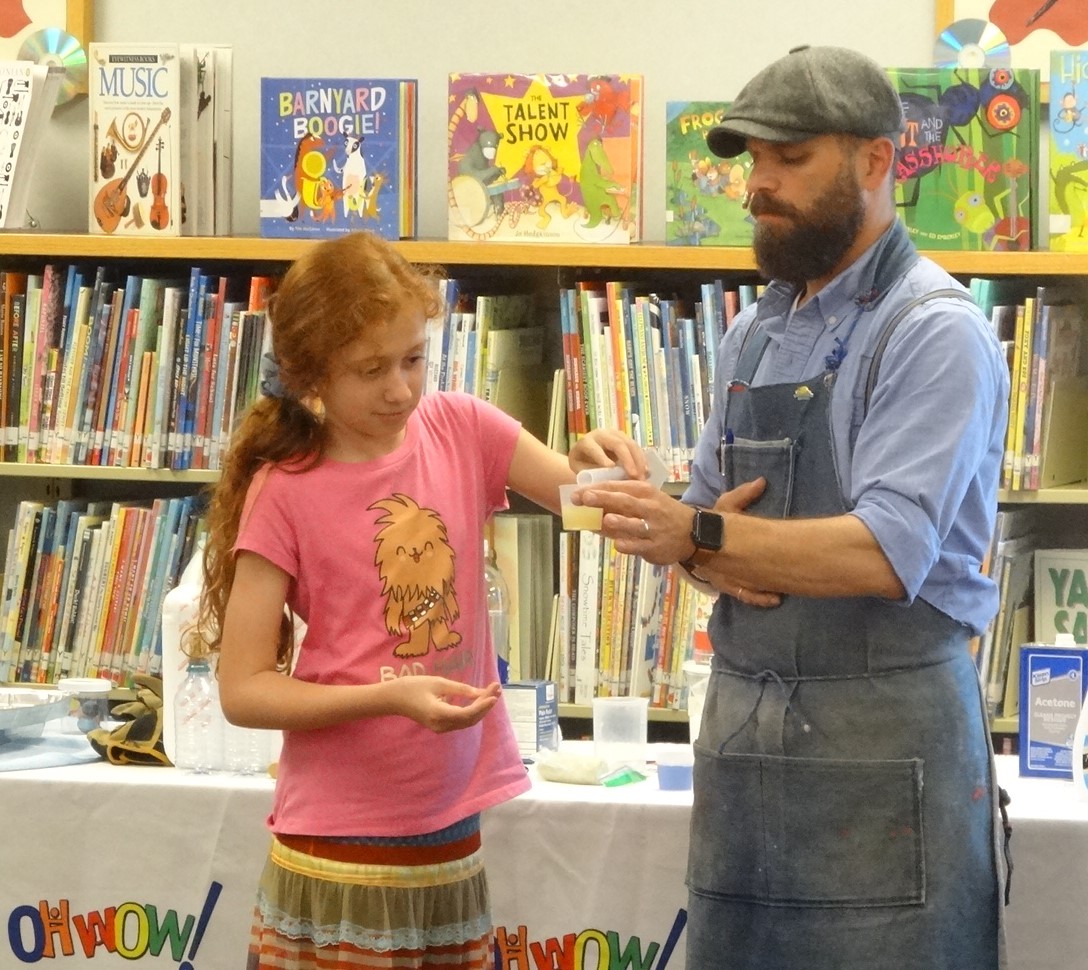 Meredith Wall pours cabbage juice into bleach to test whether the bleach is an acid, a base or a neutral. It’s a neutral.

Ten-year-old Meredith Wall called the exhibition “amazing,” and said she enjoyed how Urbach used cabbage juice to test whether different liquids – including bleach, dish liquid and water – are acids, bases or neutrals.

“It was extremely fun,” said Gage Ball, 11. “I liked the stuff he could do with liquid nitrogen and dry ice.”

The Styrofoam was used to teach the concept of assimilation. While Styrofoam is great for packing material, it’s not great for the environment because it’s not biodegradable; it doesn’t break down when exposed to water, air or soil.

But, Styrofoam will dissolve when placed in acetone, the stuff that’s also in nail polish remover.

Urbach placed about an eight-inch-long piece of Styrofoam in a small measuring cup filled with acetone, and the Styrofoam got shorter and shorter until it dissolved.

“If you look, it’s now become a goo,” he said, showing the about 25 kids the contents of the measuring cup. “It has assimilated into the acetone. It has become part of the acetone.” 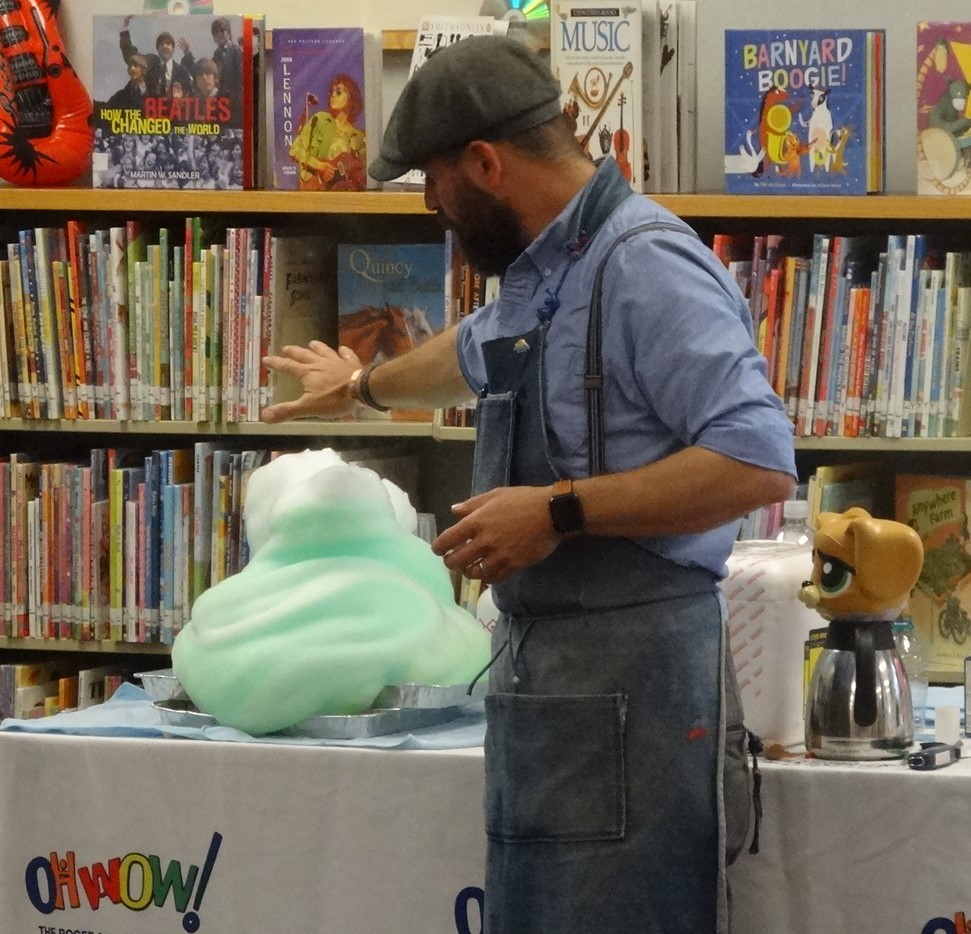 Ralph Urbach feels the steam coming off a pile of bubbles made by mixing peroxide, potassium iodide, green food color and dish liquid.

An exothermic reaction produces heat and energy, and the mixture bubbled up in a green mass about a foot high.

“It’s very hot,” Urbach said, showing the kids the steam coming off the top of the pile. “I added two things that were cool and they produced heat.”

On the opposite end of the heat spectrum, Urbach used something that is very cold – liquid nitrogen, stored at minus 300 degrees – to create what he called “dragon’s breath.”

Urbach popped Cheetohs into the liquid nitrogen, instantly freezing them, fished them out with a cooking utensil and had the kids eat the Cheetohs. If they kept their mouths shut as they chewed, streams of white jetted from their noses.

In top photo: Ralph Urbach helps Gage Ball aim where the cork will go when the carbon dioxide inside the bottle expands to the point of ejecting the cork.

Here is a list of more kids programs at the library: 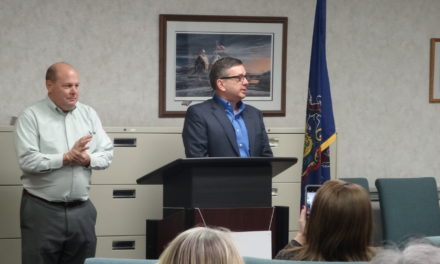 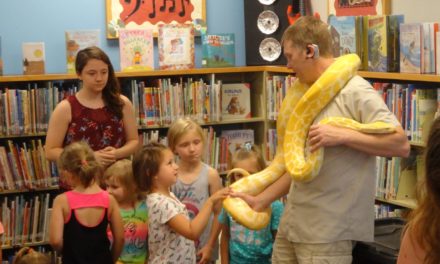