Brookfield Local School District’s five-year forecast shows the district holding steady financially, pending contract negotiations with the teaching and nonteaching unions that likely will begin in the spring.
The forecast, which Treasurer Julie Sloan presented to the school board Nov. 18, shows the district with cash in the bank at the end of this school year and the next four. The forecast is conservative in that it doesn’t anticipate a big increase in state funding, and acknowledges that the COVID-19 pandemic could impact funding.
“Property taxes, I was hesitant to overestimate what we would be bringing in for property taxes given what the world is going through right now,” Sloan said.
Revenues are projected to end this year at $10.2 million and rise to $10.4 million by the 2024-25 school year.
On the expense side, payroll costs for years ’22 through ’25 assume steps-only increases and no per-year salary hikes. Sloan said.
“We will be negotiating in the spring with both unions,” she said.
The forecast assumes the district will start realizing a reduction in utility costs brought on by a project to change out

electrical and plumbing fixtures to more energy-efficient ones.
The forecast shows the district running into the red on a per-year basis this year due to a transfer of $520,000 out of the general fund, with revenues topping expenses in subsequent years.
The transfer, if it goes through, would be a result of the Ohio Facilities Construction Commission, the district’s partner in the school building project, saying the district has retained $520,000 in interest earnings in the general fund that should have been transferred into a separate fund, Sloan said. The district received bond proceeds used to pay for construction and placed it in an interest-bearing account, which she said is common.
The issue predates Sloan’s time as treasurer, so she is reviewing records with the help of the Northeast Ohio Management Information Network, a shared technology center that serves schools in Trumbull and Ashtabula counties.
“I want to verify that we in fact do owe it,” Sloan’s said. “It is factored into our forecast but, before we pay it, I want to make sure. Once I get some better reports, then I’ll probably go back to OFCC with what I found and verify with them.”
Sloan said the resolution will not impact the timing of any remedial work done at the middle school to alleviate the lifting hallway floor and cracking walls in the central part of the school. Supt. Tony Gibson has said he hopes the work will be done once school is out in the late spring.
“OFCC won’t put any more money towards the project until that’s taken care of, assuming that it’s still owed,” Sloan said.
However, the money still will be available to the district to go toward the remediation project, she said.
“It’ll really be just a transfer, and it’ll be money that’ll go right into the project,” she said.
Even with the transfer, the forecast shows the district maintaining a fund balance of $1.6 million to $2 million through the 2024-25 school year. 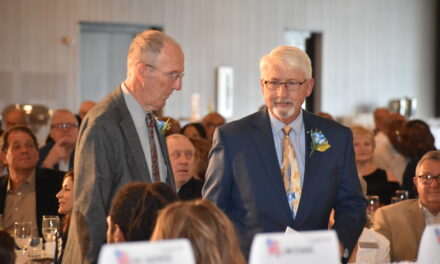