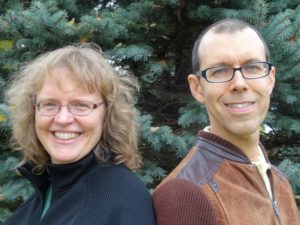 News on the Green, a publication of PS Pinchot-Swogger Publishing, LLC, seeks to tell the stories of Brookfield, Masury and Yankee Lake residents and explain the issues that are before them.

Yes, our population has been declining, and, yes, many of the industrial forces that built this community have taken a hit, but Brookfield Township and Yankee Lake Village remain a tight-knit community of people who look out for each other, care for each other and support each other. With News on the Green, Joe and Judi hope to do their part.

Judi is a Brookfield native and 1979 graduate of Brookfield High School. She earned a bachelor’s degree in journalism from Kent State University.

Joe grew up in western Pennsylvania and graduated from West Allegheny High School, Imperial, Pa., in 1983. He received an associate’s degree in management and then went on to earn a bachelor’s degree in journalism and communications from Point Park University, Pittsburgh.

Joe and Judi began work at the same daily newspaper just months apart, and, seven years later, proved that reporters and editors could get along, as they were married in 1995. They have four children — Natalie, Siri, Uriah and Malachi — and live in Masury.

Judi has experience as a writer and as a copy and design editor in the newspaper industry. She also has experience in proofreading and book manuscript editing.

Joe spent 29 years as a reporter for an area newspaper, covering local governments and courts, writing feature stories about people and events, and specializing in arts and entertainment writing. Early in that career, he was responsible for covering Brookfield during one of the township’s more politically turbulent times.

So, that’s our story – the short version. We hope you’ll come along with us as we work to present to you the stories of the people of this community, as well as new of its governments and schools, and examination of the issues we face – all with the goal of giving Brookfield, Masury and Yankee Lake a voice.