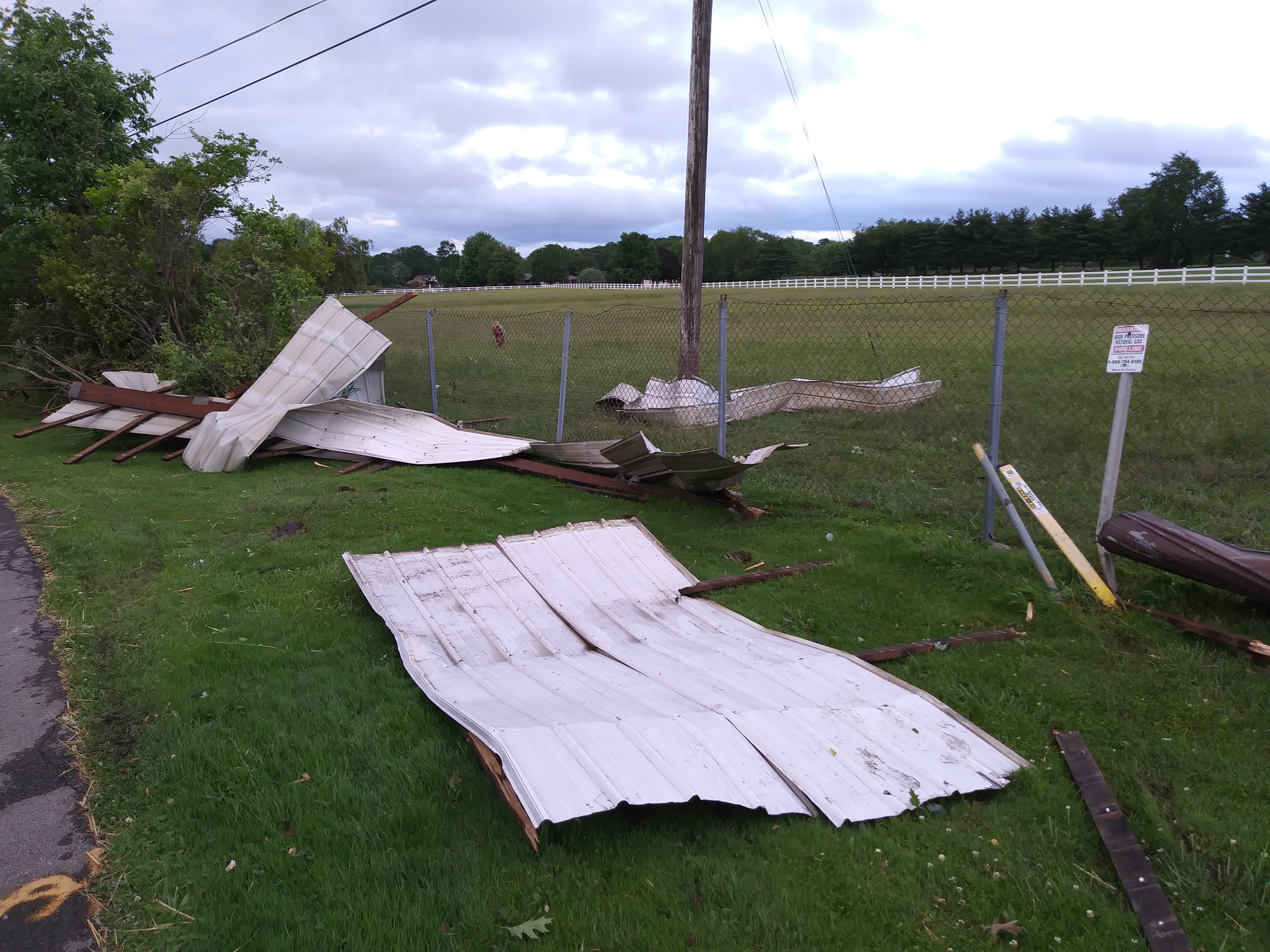 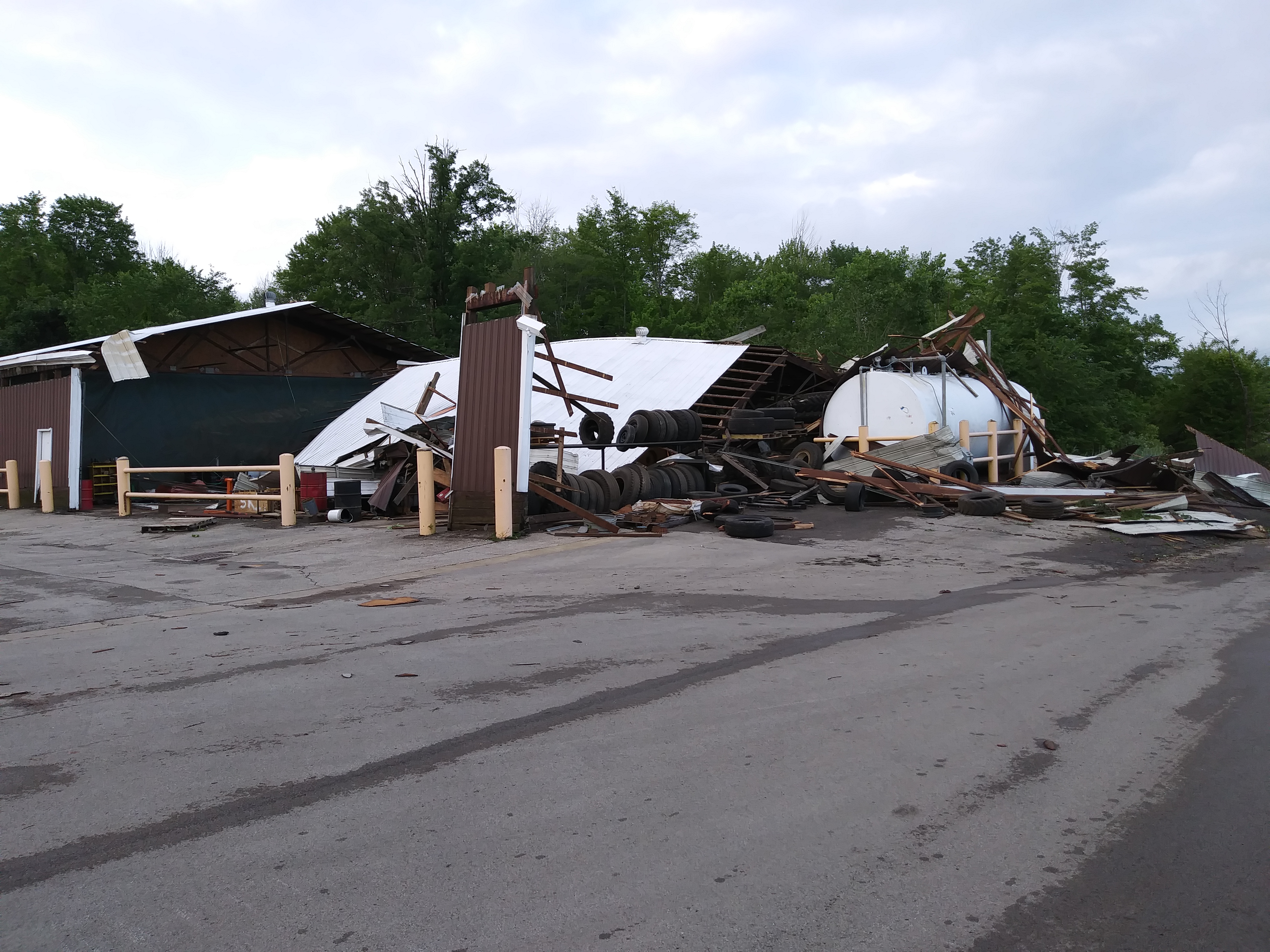 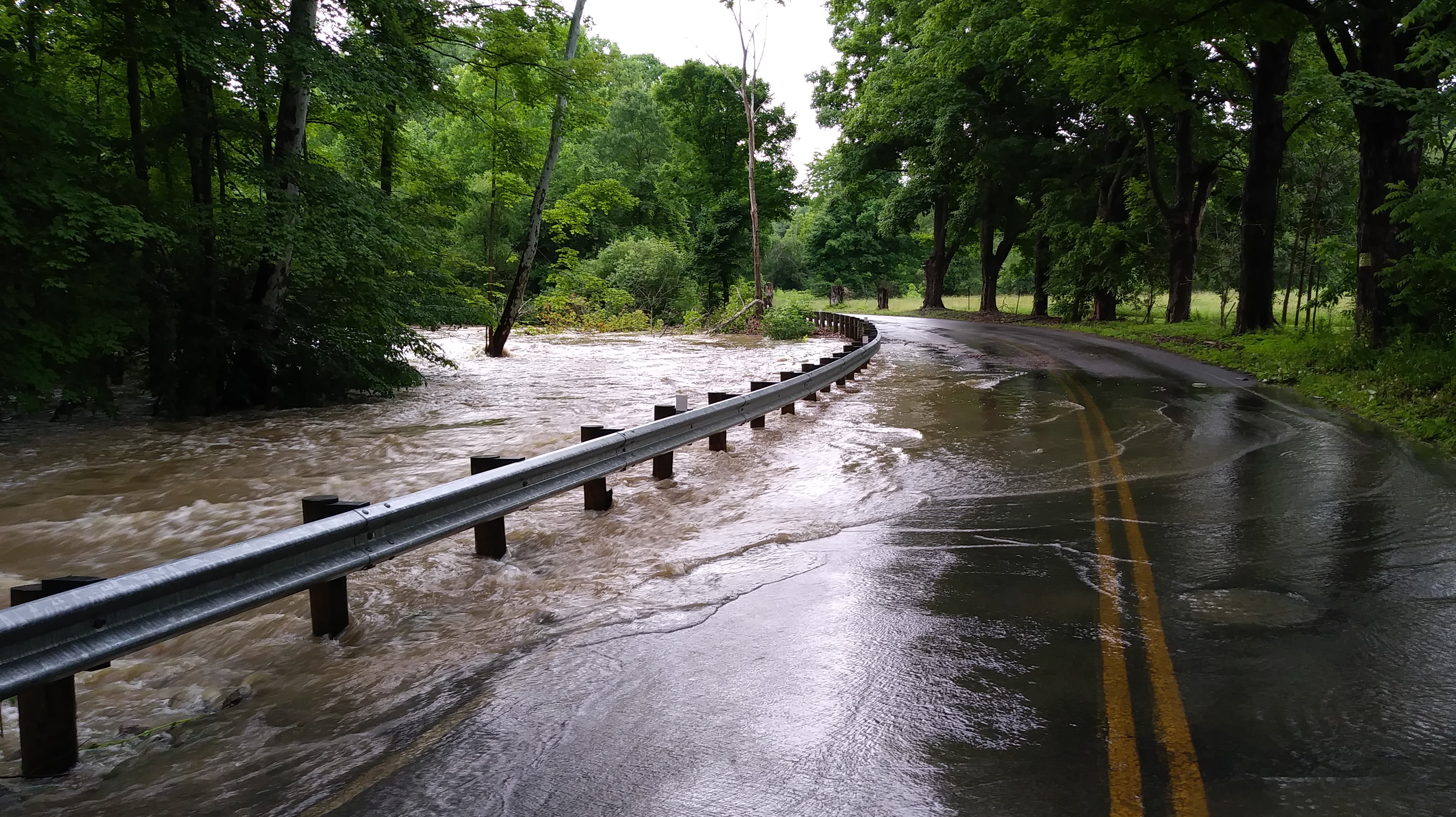 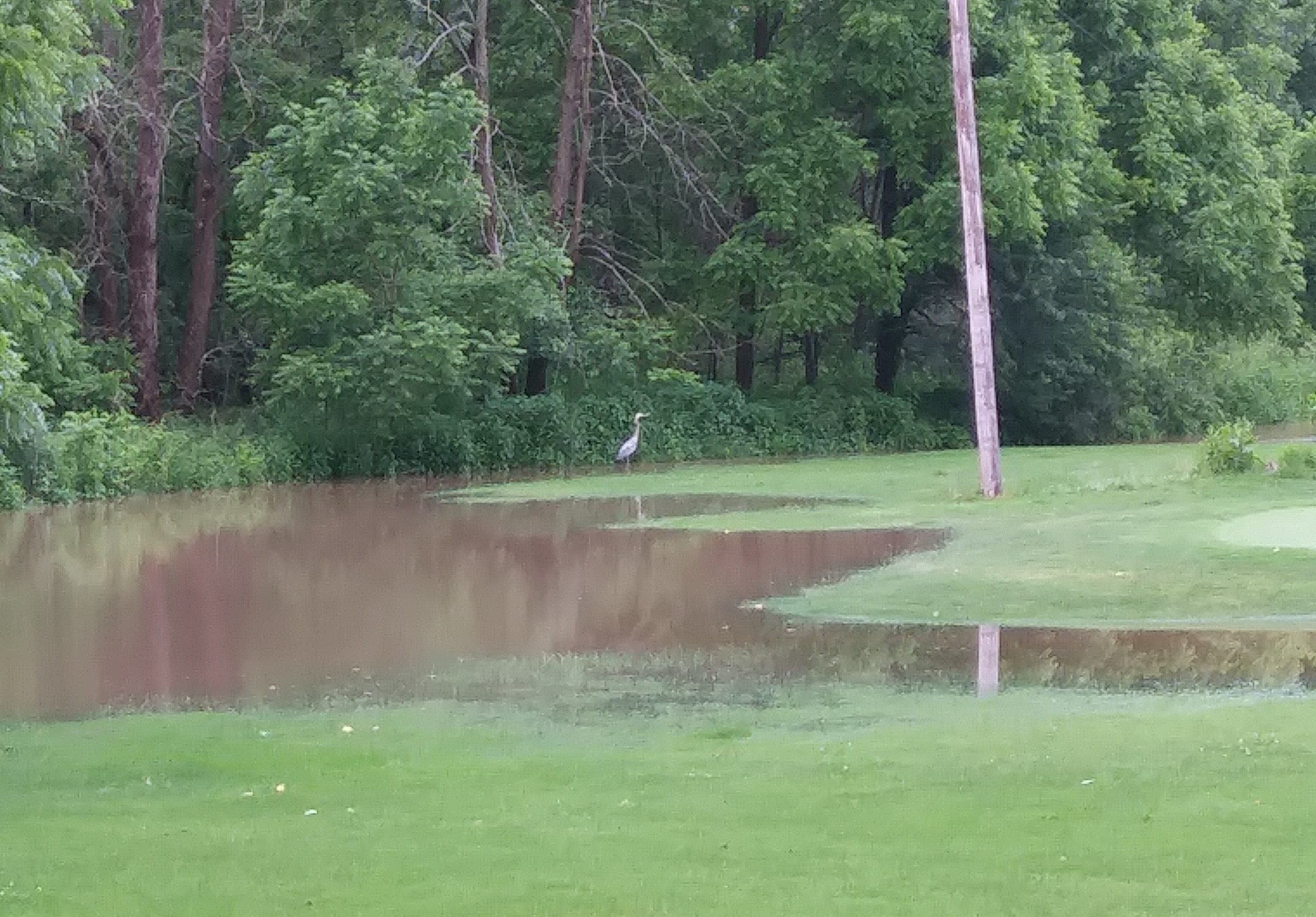 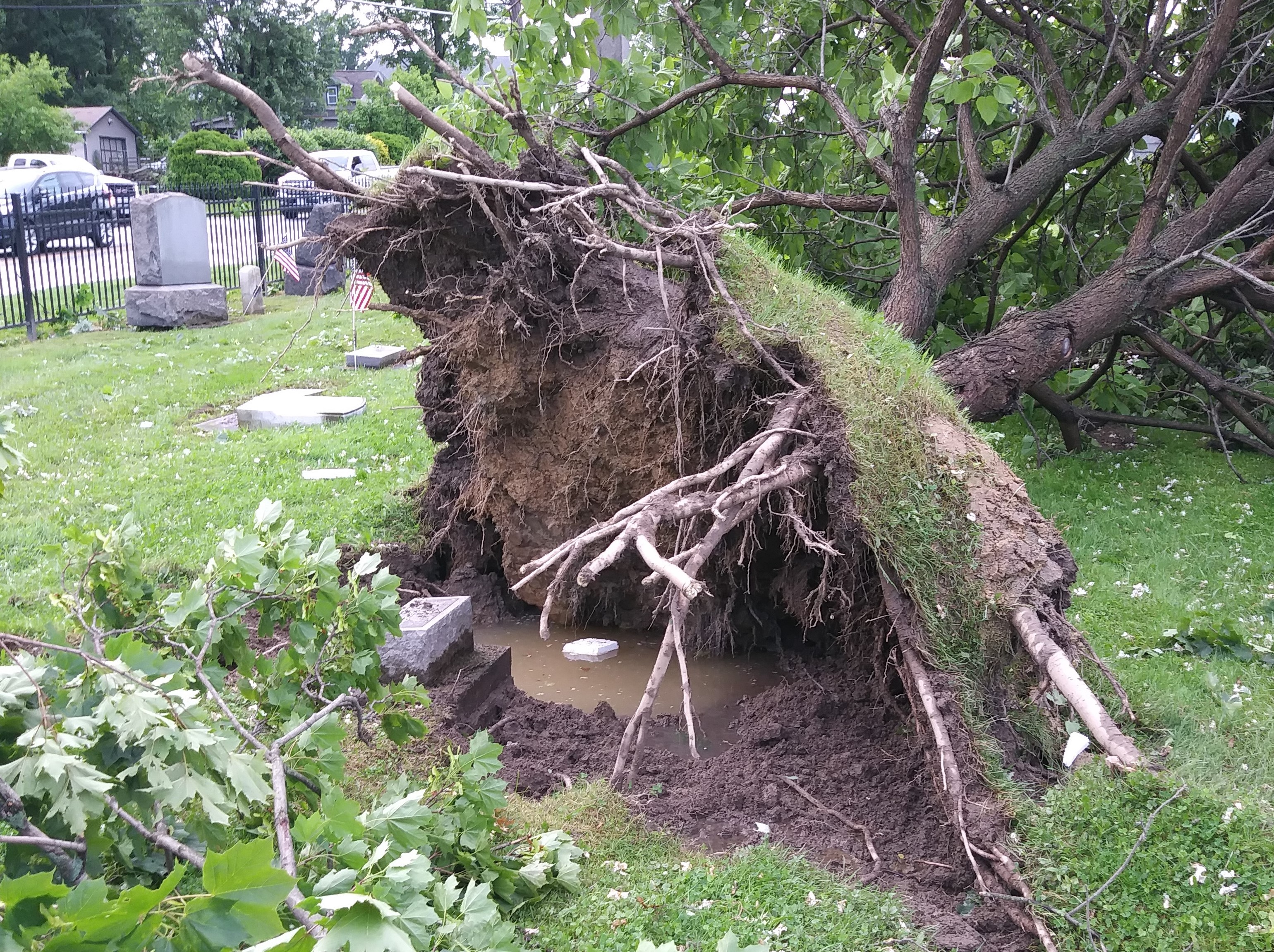 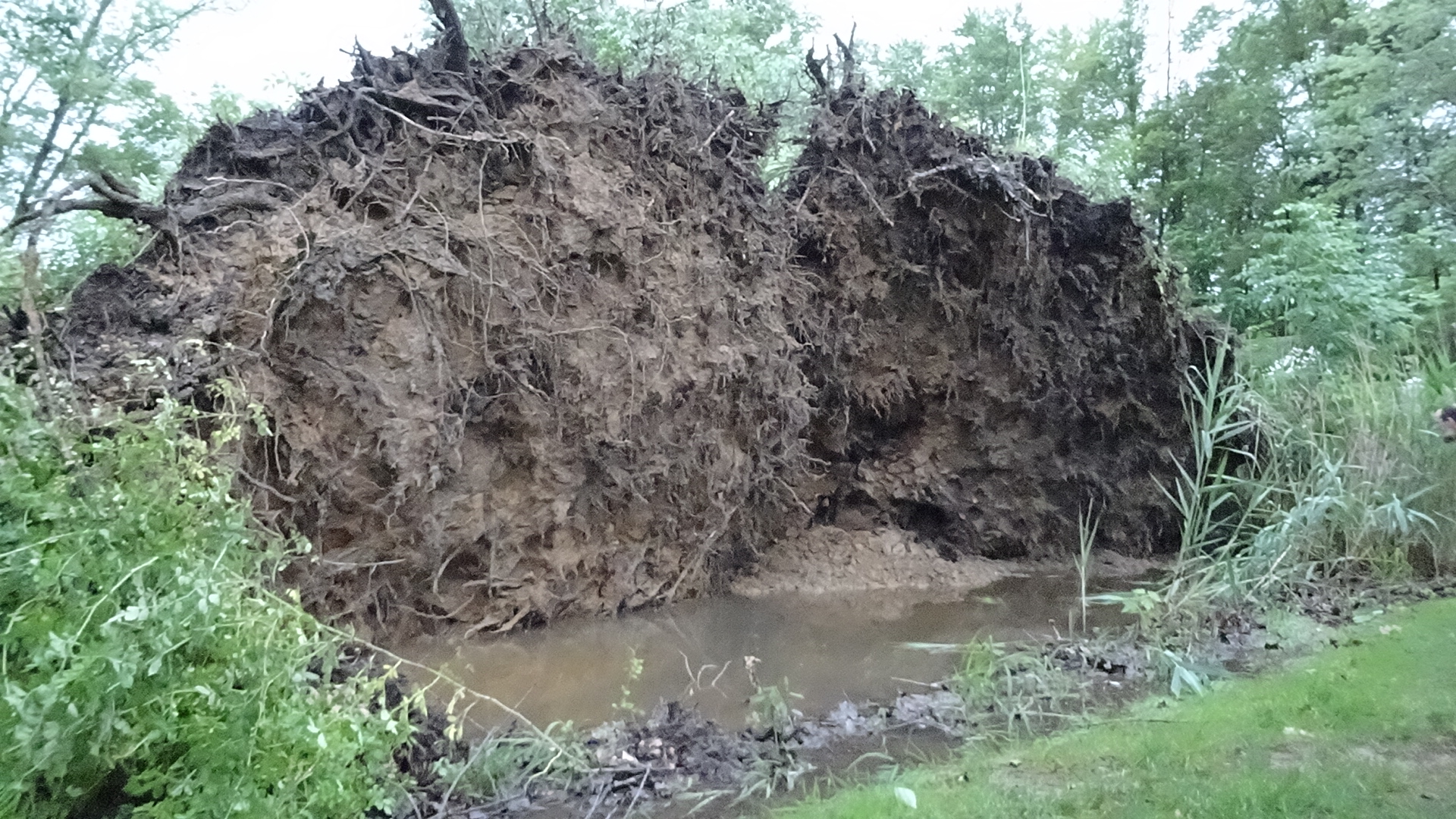 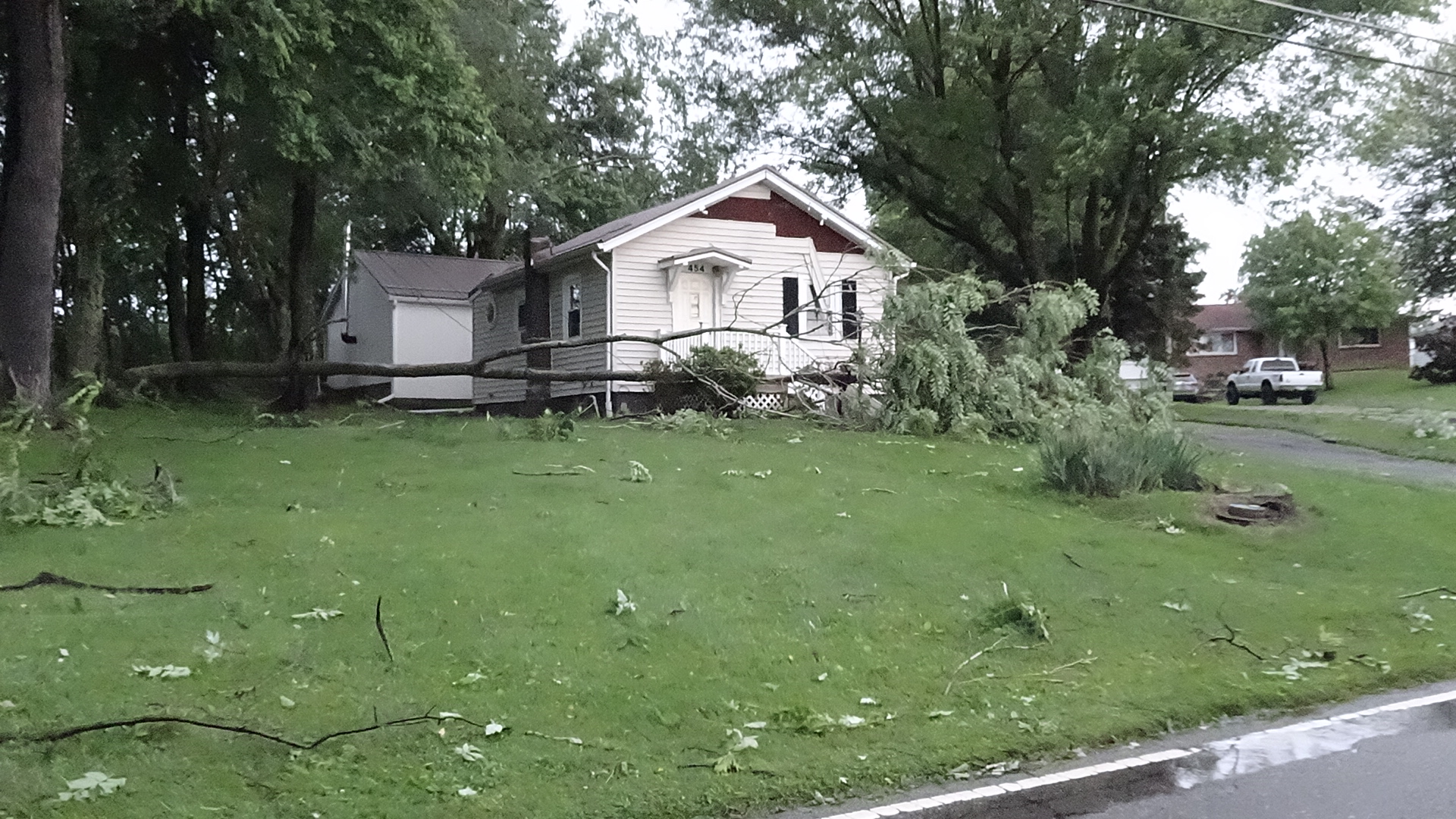 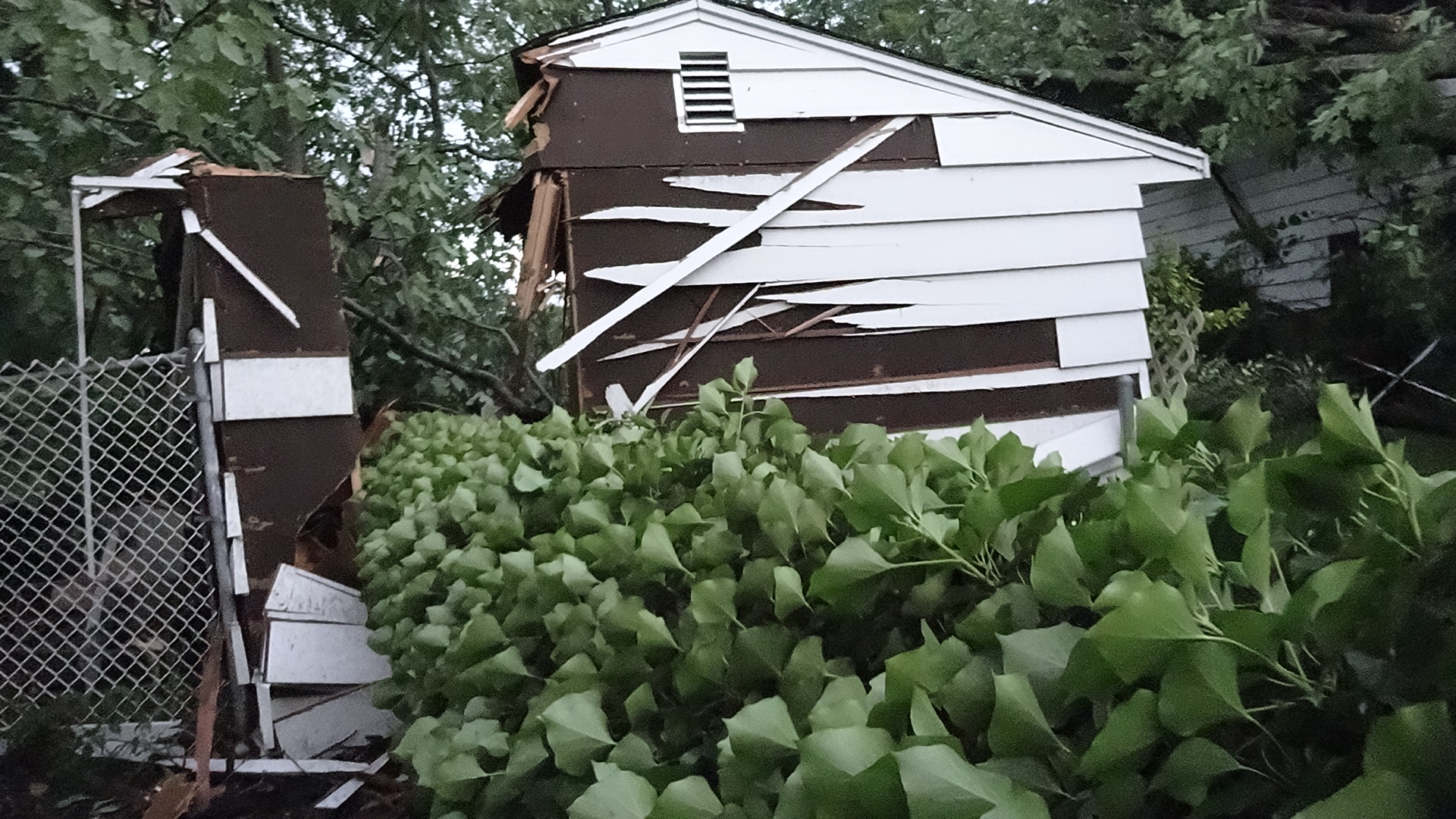 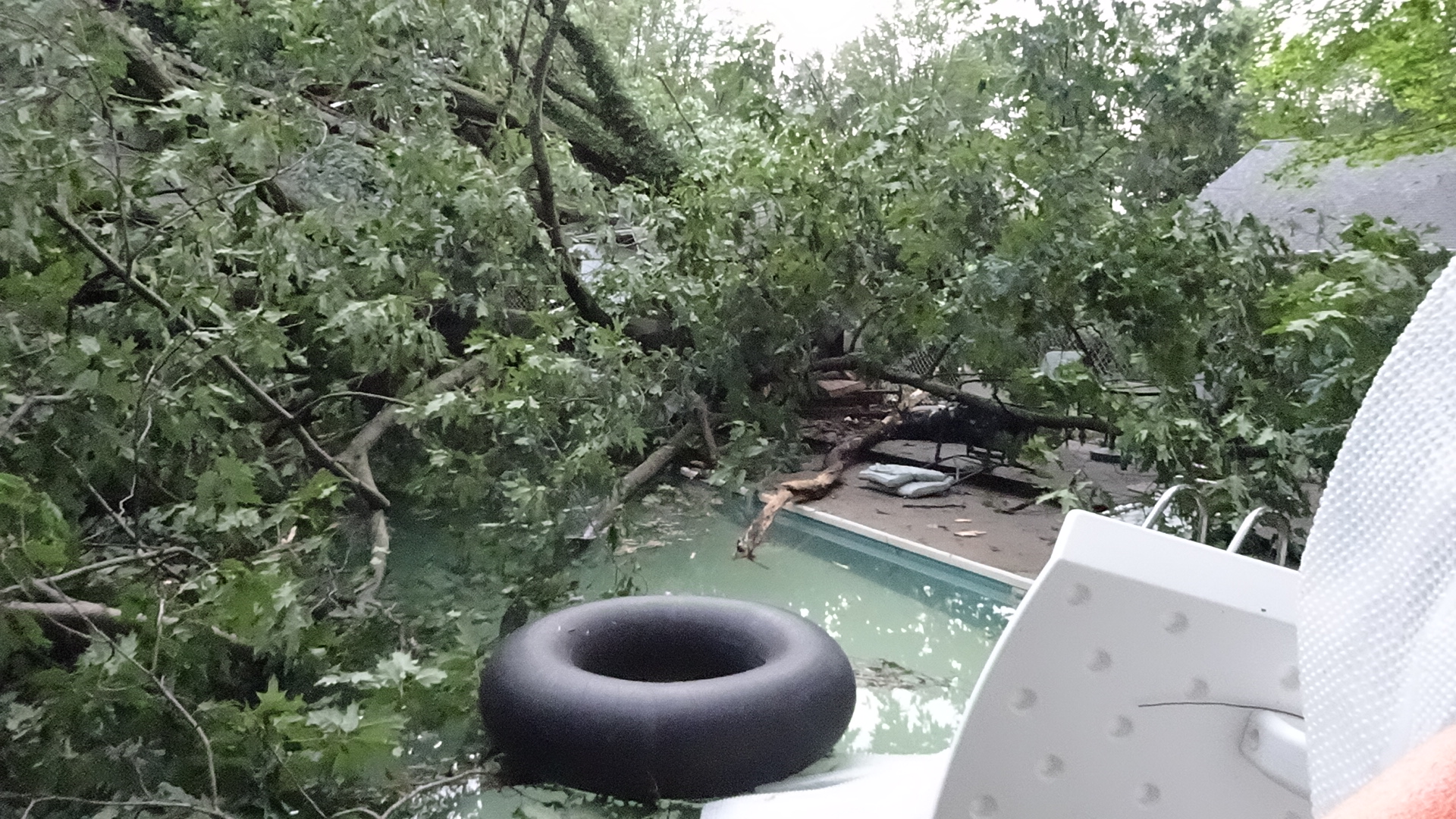 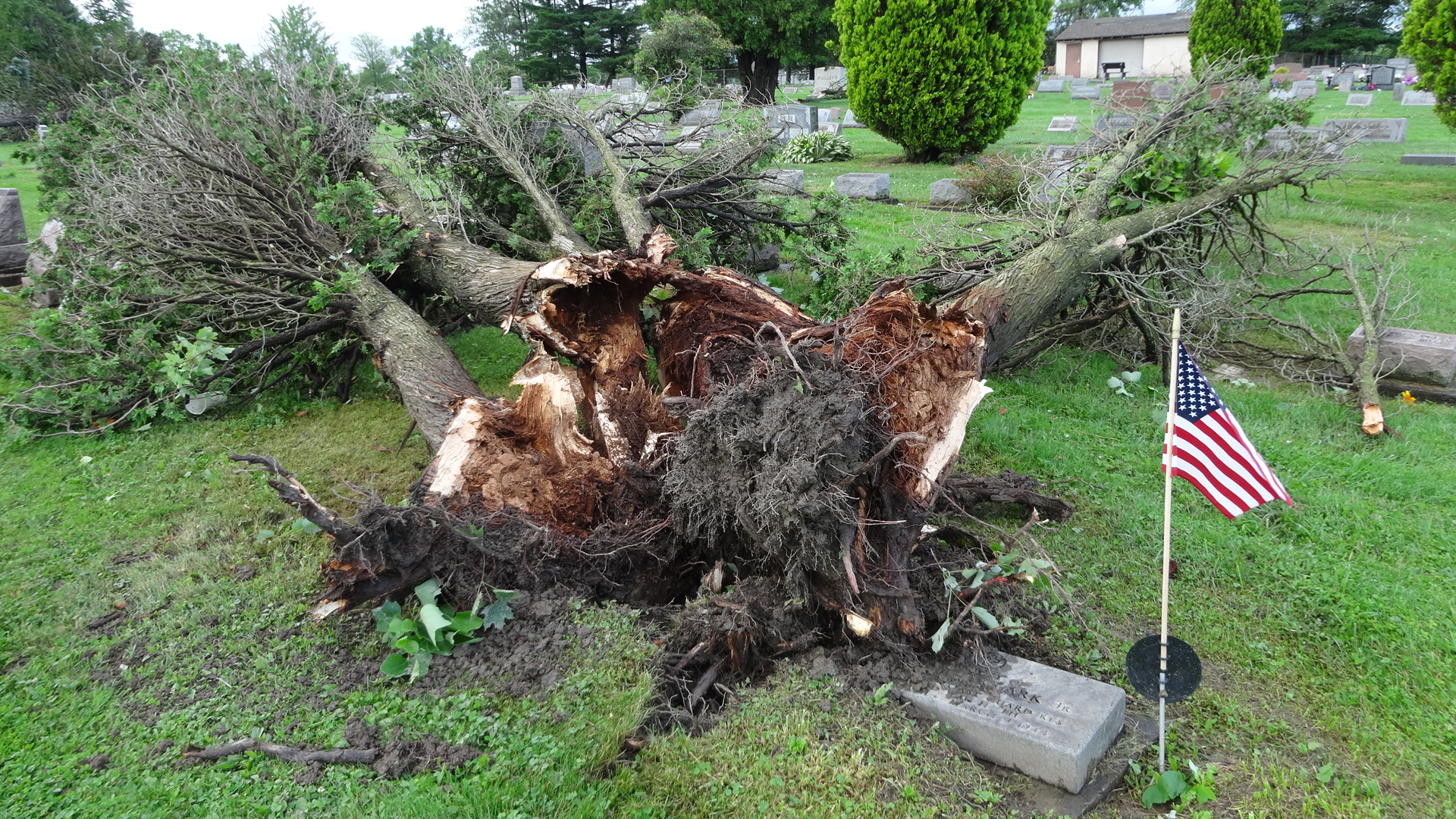 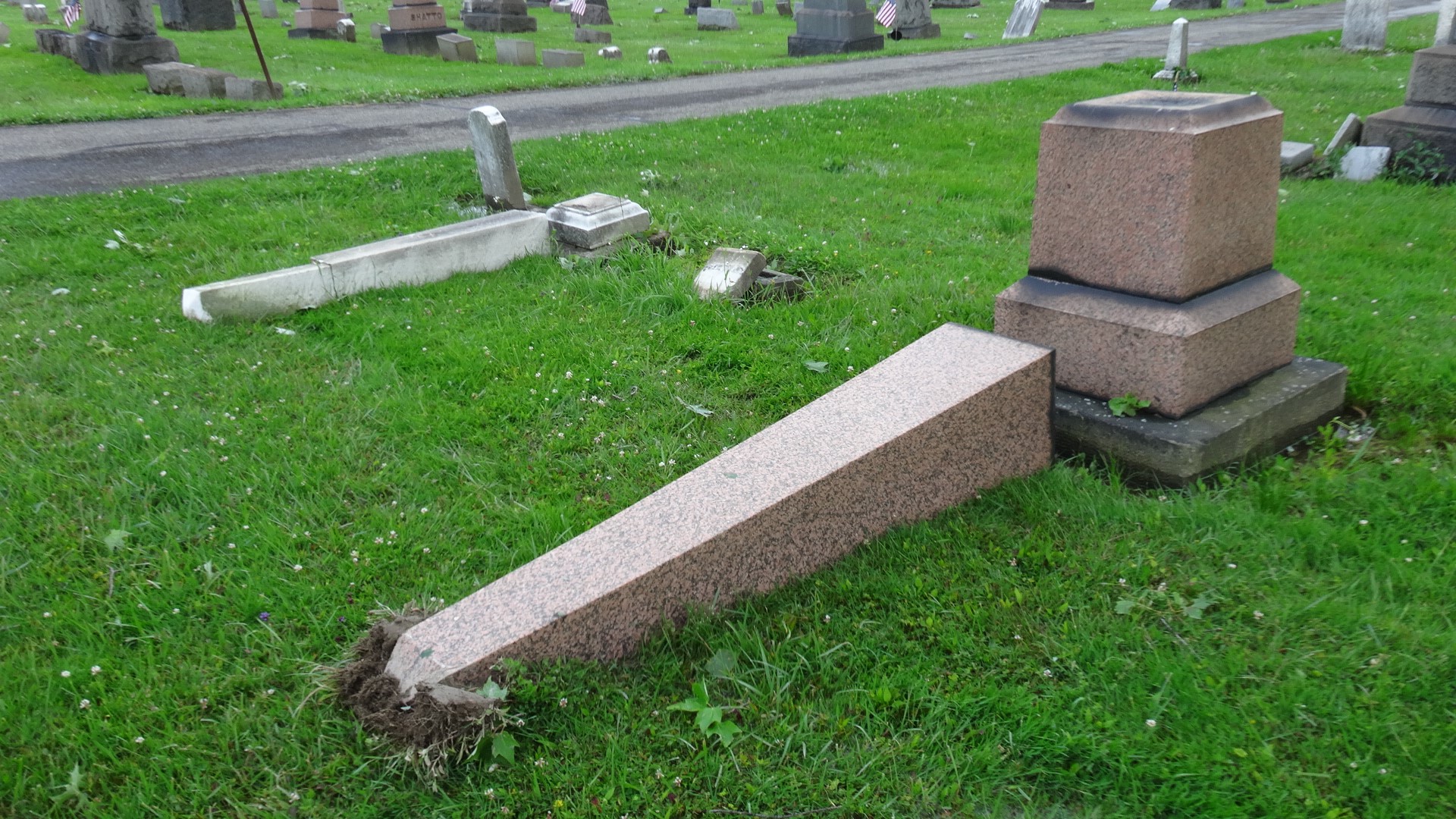 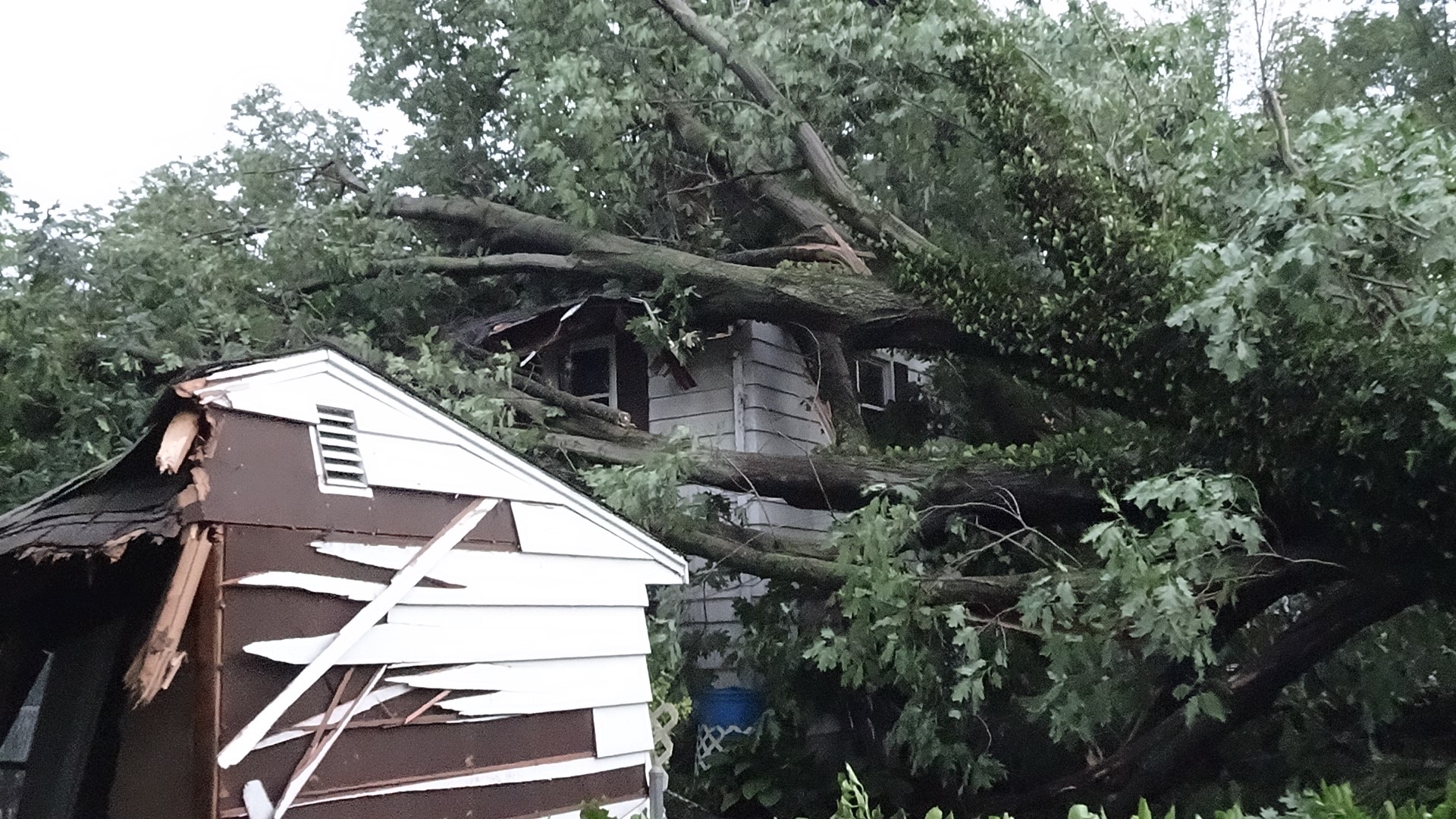 Considering the damage the oak tree did, Gary Pilner was surprised that it didn’t shake the house when it crashed through his roof into his bedroom.
Luckily no one was in the room at the time.
“We were running for the basement when it came down on the house,” the resident of Joy Road in Brookfield said the evening of June 16.
The Pilner family could not stay in their home, and were packing up to head for a motel.
A second tree next to the first one also fell, cutting Pilner’s shed in two.
“That had to be a heck of a wind to uproot those trees,” said Pilner’s wife, Jody.
A heck of a wind, indeed. The spring storm left a path of destruction that headed east from Wood Street in Brookfield Center; across Brookfield Township Cemetery, where it sheared and uprooted trees and toppled gravestones; down Joy, where it blew apart a storage shed at Kirila Contractors Inc.; and went up Ohio Street in Masury.
Route 82 was shut down for a while from all the trees and debris that littered the road, said township Road Superintendent Jaime Fredenburg.
The rain that accompanied the storm brought Yankee Run Creek up its banks and onto Yankee Run Road, which was closed by the Hobo Hilton, and onto Yankee Run Golf Course, where a heron enjoyed an expanded view of the golf course.
The trees that fell on the Pilner property came from the back yard of Fran Fulmer’s condo on Castle Creek Drive.
Fulmer was standing at her backdoor, watching the sideways rain when she heard a sound like a train.
“I saw them uproot,” she said. “I’ve never seen anything like that. My heart was pounding.”
The root systems from the trees stand a good 12 feet in the air just off her back porch, dropping mud into the water-filled holes where the roots once took hold.
When the storm hit Ohio Street, it knocked two evergreen trees across the driveway of 96-year-old Catherine Orynycz, falling into the electric line that supplies her house.
“It was an amazing sight to see one tree come down and then the other,” said Orynycz’s daughter, Irene.
The storm came and went quickly.
“It was fine and then it hit and it was all over,” Pilner said.
The Pilners said they had been in touch with their insurance company but did not have a definite time when an adjuster would visit their home. Jody Pilner said she hoped something could be done before more rain hits and it gets into her house, doing even more damage.
Irene Orynycz said the family already has been talking about cutting down the pine trees on her mother’s property, which were a memento of her late father, who “loved his Christmas trees.”
“I said, ‘Let’s wait until we get dry weather,’” she said.
The damage to the Kirila building was extensive. Metal roofing was blown a couple hundred feet down Joy, and insulation was stuck to fence and trees.
At the cemetery, which probably saw more visitors than usual anyway because it was Father’s Day, family members came to inspect whether there was any damage.
“What a mess,” said road crew member Matt O’Dell.
Fredenburg noted that in his more than 30 years with the township he had never seen anything like this at the cemetery.
“What a disaster,” he said. “We’ll probably do an assessment tomorrow.”
It will be up to family members to repair any damage done to their loved ones’ graves, Fredenburg said. 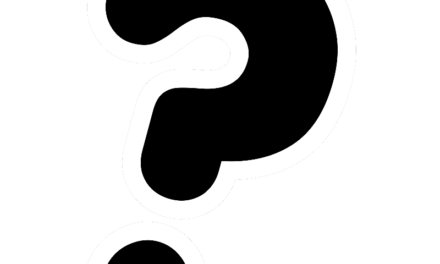 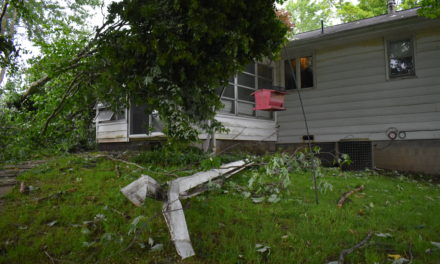 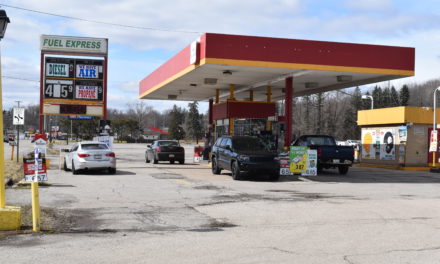 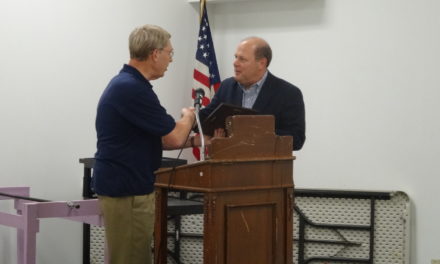