Thriller BMX Team members Spencer Scott and Rob Giehl wowed Brookfield school students Nov. 16 with an array of bicycle stunts, taking off from a five-foot-high ramp to perform tricks with names such as tire grab, no foot and nothing.

Giehl jumped three teachers who were lying flat on the gym floor – the number was extended to five when Scott and team member Zack Gerber lengthened the line – and Scott jumped over Brookfield Police Cpl. Ron Mann as Mann sat in a chair on top of the ramp. For the elementary school, Principal Stacey Filicky occupied the hot seat.

Gerber pumped up the crowd with loud rock music and an encouraging, energetic delivery that got the students shouting, clapping and stomping.

“It was awesome,” said fifth-grader Josh Bentley. “I liked the back flips at the end of the show.”

“There were a lot of cool tricks,” she said.

But, for all the two-wheeled fireworks, there were positive messages lurking in the background. The riders talked about safety, noting the shin guards and ankle braces they were wearing.

“What’s the most important piece of safety equipment they’re wearing?” Gerber asked the middle and high schoolers in attendance at the first of two shows.

“Helmet,” the students roared back.

Gerber said broken bones can be reset. A brain cannot.

“I thought that was pretty inspiring, because I don’t know that a lot of kids would wear helmets,” Josh said.

Gerber went around the gym asking students what they want to be when they grow up, telling quite a few: “You can do that.”

He noted that he wanted to race bikes in the Olympics when he was in sixth grade. The next year, the Thriller BMX Team, based in Cincinnati, performed at his school, and his dream evolved into trick riding.

“My mom, she gave me that mom look,” he said of when he told his parents of his interest in trick riding.

However, his mom helped him get safety gear, and let him pursue that dream.

“I kid you not, for 10 years, in between my other responsibilities, I rode every day,” Gerber said.

One day, a representative from the Thriller BMX Team called him out of the blue and invited him to join.

Scott and Giehl have similar stories to tell, Gerber said.

“We made our dream jobs come true.”

Anyone can achieve their dream, Gerber said.

“It was a strong message, because it was a message that needs to be heard,” Leona said.

See the video of the jump over Officer Mann at the NEWS On the Green Facebook page. 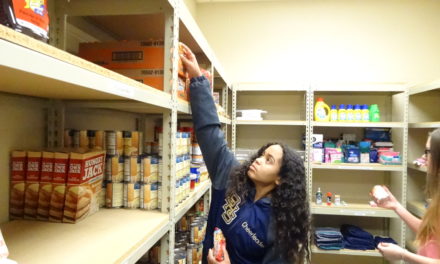 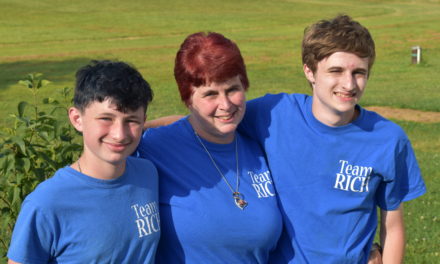 Family forms nonprofit in honor of loved one