And, because of it, they got to go to London.

Brookfield High School students Seantya, a senior, and Victoria, a sophomore, marched in London’s New Year’s Day Parade. They were eligible because of their performances at Universal Cheerleader Association’s camp last summer.

“Every year at camp, they have what’s called all-American,” said Brookfield cheerleading coach Lynn Pegg. “Girls can try out to be considered an all-American cheerleader. If they are chosen by the camp leaders as an all-American, then they have the opportunity to go to Philadelphia to do the Thanksgiving Day parade or, this year, it was London to do the New Year’s Day parade.”

“We get taught cheers and a dance,” Seantya said of the camp. “We have a certain dance and, like, a long cheer that we have to try out for to make it as all-American.”

“I was excited, but scared at the same time,” Seantya said of flying overseas. “I’ve never been on a plane. It was scary.”

“Flying over the ocean was really a scary thought,” Victoria agreed.

They flew out of Newark Dec. 26, and returned to the states Jan. 2.

The girls had been emailed a video of their routine and had about a month to practice at home. In London, they rehearsed once in the hotel, and then took their routine to the streets for the parade.

“Right when we started moving, you didn’t feel it at all,” Seantya said of the cold.

The parade had “stop points” where the 800 girls from all over the U.S. did their routine, “and then we just walked and waved,” Victoria said.

There was plenty of time for sightseeing during the trip and the girls took in Big Ben, Windsor Castle, the Tower of London, London Bridge and the London Eye, an observation platform. They also saw the musical “Wicked” and shopped.

Seantya said her favorite part of the trip was “Just seeing different things. I loved seeing how people were talking different, driving different.”

Both girls said the trip was well worth the money, and recommended that other Brookfield girls go, if they can.

“It was definitely a once-in-a-lifetime thing you should do,” said Seantya, who plans to study social work at the University of Akron. “I loved it.” 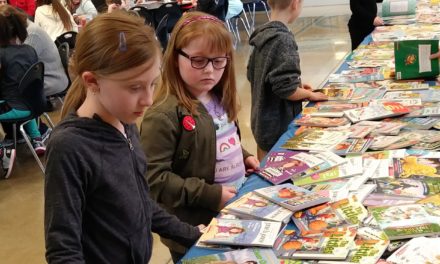